The equation between India and Pakistan cricketers didn't change one bit after Rohit Sharma and Co's five-wicket win over Pakistan in Dubai. 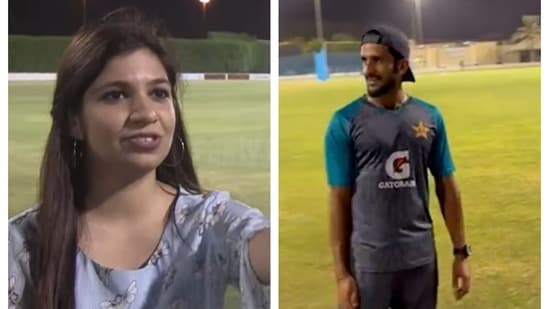 On Tuesday, during Pakistan's training session, Hasan Ali was heard saying "I love India" when he came to know that an Indian woman was waiting for him. Another person standing to the lady informed the Pakistan fast bowler that he has a lot of fans in India and requested a selfie. “India se fan toh honge hi na (Obviously there will be fans from India),” said Hassan Ali before readily agreeing and posing for the selfie.

The 28-year-old was seen in good spirits, enjoying light-hearted conversations with journalists and fans while jogging.

Notably, Hasan Ali has an Indian connection as his wife Samiya Arzoo is of Indian origin. The fast bowler was not a part of Pakistan's Asia Cup squad but was drafted in as a replacement when Mohammad Wasim was ruled out due to an injury.

Hasan Ali did not play against India because Babar Azam selected Haris Rauf, Shahnawaz Dahani, and Naseem Shah as his three specialist seamers. With cramping preventing Rauf and Naseem from playing, it would be intriguing to see if Hasan gets a chance against Hong Kong, which is a must-win game for them to advance to the Super 4 round of the tournament.

Meanwhile, India will face Hong Kong on Wednesday. A win over the comparatively weak opponent will see them advance to the next round.