Iyer realizes their mistake, corrects his English during the post-match presser!! 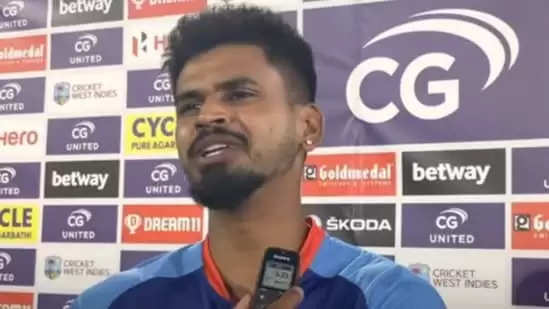 Shreyas Iyer amassed all in the 50-over format following his back-to-back impressive knocks against West Indies in the ongoing series in Port of Spain where scored half-centuries in both the matches of the series. Iyer, reported pointed out the extended net session he had with India batting coach Vikram Rathour during the practice session prior to the first ODI before asking whether these back-to-back knocks are a reflection of that hard work he put in.

"Yes obviously," started off Iyer. "Whatever hard work there is, is off the field. These (knocks) are only a replica of it."

Iyer realized it quickly and stopped. He admitted that "replica" was the wrong word. Although he could not find the word for that, he continued saying, "Whatever you see here on the field is a result of what you do off the field."

Iyer was however unhappy that he failed to take India over the line as he was dismissed LBW by Alzarri Joseph on 63 off 71.

"I was really happy with the score which I got today but really unhappy with the way I was dismissed. I thought I could have taken the team through easily but very unfortunate with the wicket. Hopefully, I score a century in the next game," said Iyer.