Kohli looks up, bach Gaye in million-dollar reaction vs Pakistan!! 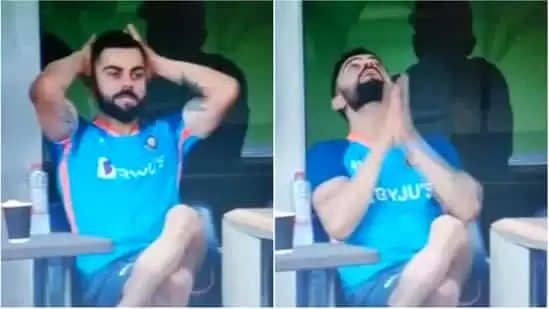 India registered a remarkable victory over Pakistan on Sunday night. Rohit Sharma's men emerged winners, thanks to Hardik Pandya's brilliant all-round knock and brilliant contributions from Bhuvneshwar Kumar and Ravindra Jadeja, among others. 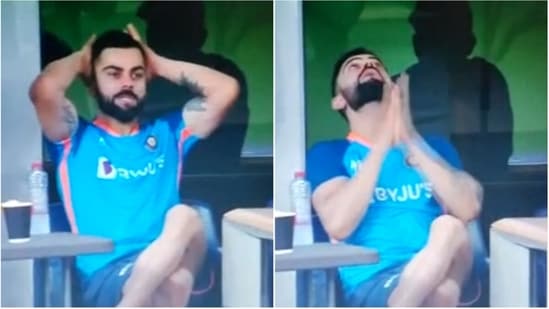 Pandya remained unbeaten on 33 off 17 deliveries and hit the winning runs in the match, while Jadeja also scored 35 off 29 balls and Bhuvneshwar picked four wickets. With the ball, Pandya also ended with three wickets to his name in four overs.

Even though India was chasing a 148-run goal in Dubai, a handful of early dismissals followed by two wickets at regular intervals ensured India's run rate was equal to Pakistan's in the first innings. The men in blue needed 32 runs to win at the start of the 18th over, and Naseem Shah appeared to have dealt India a big setback on the fourth ball of the over when the umpire raised his finger on a leg-before appeal.

Jadeja immediately reviewed, and he would've been out had the ball not been pitched just outside the leg-stump. The Indian camp breathed a collective sigh of relief as the umpire's judgment was overturned, but star hitter Virat Kohli's.

The successful review came to India's aid, as Jadeja blasted Naseem Shah straight onto the sightscreen for a six, reducing the equation to 21 off 13 balls. Jadeja appeared to be on track to win the match, but he died on the first ball of the final over after failing to connect bat to ball while aiming for the glory shot. As the ball ricocheted off his pad and slammed into the stumps, Jadeja attempted a slog sweep. But there was a twist in the tale: three balls later, Hardik Pandya hammered a six to give India the victory.

Earlier, Kohli had scored 35 on his return to international cricket after an almost month-long absence.

Kohli has dropped off the second ball at slips off the bowling of Naseem Shah but an authoritative pull shot for four off Shahnawaz Dahani signaled Kohli's intent. The former India captain top-edged Haris Rauf for a six and in the next over, played Dahani over the cover-point looking a lot more assured. Kohli picked up his fourth boundary and arguably his best of the evening as he played an incredible stroke - almost a combination of a pick-up shot and a wristy pull. Big innings seemed to be on the cards for Kohli but he mistimed a ball from Mohammad Nawaz and was out caught at long-off.

India will return to action on July 31 when the side takes on Hong Kong in its second and final match of the group stage. A win will secure their place in the Super 4s where India in all likelihood square off against Pakistan once more in Round 2 of this Asia Cup.