Manjrekar asks Jadeja Whether Ok getting interviewed by me after India beat Pakistan!! 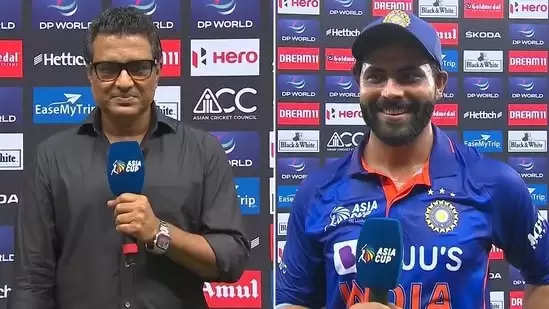 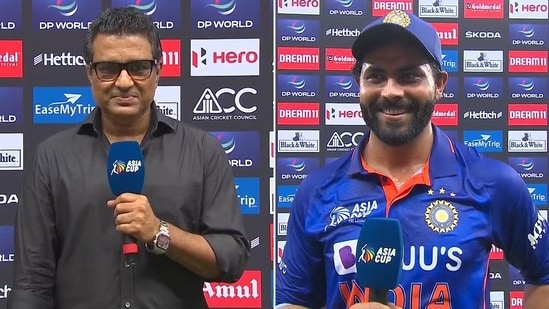 That is, until now after India emerged winners, at the Dubai International Stadium on Sunday thanks to Hardik Pandya's brilliant all-round knock and brilliant contributions from Bhuvneshwar Kumar and Ravindra Jadeja, among others.

Manjrekar was assigned the task of interviewing Jadeja, who scored a crucial 35 off 29 balls and had a role to play in India's win. Manjrekar decided to break the ice by lightening up the mood. Manjrekar's first question was whether he has no issues getting interviewed by him.

"Well, I've got Ravindra Jadeja here with me. First question 'You're ok to talk to me, right, Jaddu?', to which the India all-rounder replied, 'Yeah. I don't have any problem,' with a smile. It was a wonderful moment between the two, enough to prove that Jadeja and Manjrekar have buried the hatchet and put dirt over the incident that happened in 2019 in England.

It all began when a comment of Manjrekar had gone viral. "I am not a big fan of bits and pieces players which Jadeja is at this point of his career in 50-over cricket. In Test matches, he is a pure bowler. But in 50-over cricket, I would rather have a batsman and a spinner," he had said. In reply, Jadeja launched an attack on Manjrekar and tweeted: "Still I have played twice the number of matches you have played and I am still playing. Learn to respect ppl who have achieved. I have heard enough of your verbal diarrhea," creating an uproar around the cricketing world.

Jadeja then spoke about his innings, "Thank you very much. We wanted to play till the end, they have a very good bowling attack, but their fast bowlers don't give anything away. I could have finished the game - left-arm spinner against the left-hander, but Hardik played superbly. He (Pandya) came out and said he was going to play his shots, and happy that he stayed till the end," he said after the match.