Rohit Sharma Got Angry On The Question On Virat Kohli Watch his reaction!! 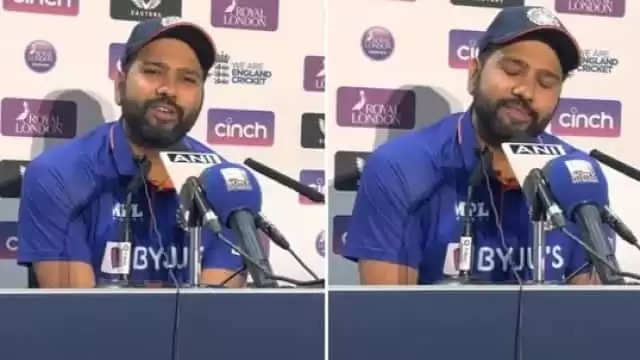 Virat Kohli is currently going through the poor form of his career. Because of this, some questions related to him are often asked by the players and coaches in the press conferences. Captain Rohit Sharma has to face this question the most. Let us know what happened between Rohit and the journalist after the crushing defeat in the second ODI against England.

Reporter – There is a lot of discussion about Virat Kohli

Before the journalist could finish his question, Rohit interrupted him.

Rohit said – why is it happening man? I don’t understand brother. Well ask?

The journalist later completed his question, Responding to this, Rohit Sharma said, ‘He has played so many matches for so many years. He has been such a great batsman so he doesn’t need assurance. I think I also said in the last press conference that the form can go up and down. That is part of the game, it happens in the career of all players. So a player who has won so many matches needs only 1 or 2 innings. I believe and I am sure others feel the same way.’

In Lord’s ODI also, Kohli could not score big. During the innings of just 16 runs, Kohli’s bat got three fours. He was dismissed by David Willey on the outside ball and showed the way to the pavilion.