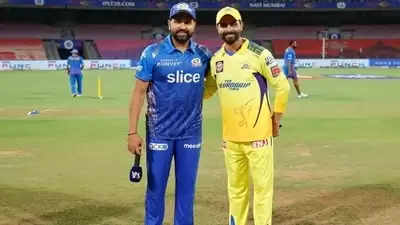 Ravindra Jadeja was named captain of Chennai Super Kings after MS Dhoni got flattened under pressure and eventually gave up the role, eventually igniting rumors of a rift between him and the four-time champions.

Six of the team's eight games were lost while Jadeja was in charge. When he was leading the T20 team, his own play didn't seem very good. In 10 games, the Saurashtra all-rounder only scored 116 runs at an average of 20 and took only five wickets at a rate of 7.51 runs per over.

A few days after he stopped being captain, he got a rib injury that kept him from playing in the new 10-team tournament. Injury was given as the reason for his leaving, but many people thought the fiery all-rounder was taken out of the Chennai eleven.

Many people think that the 33-year-old will be playing for a new team next season because of what he has been doing on social media. On his official Instagram account, he deleted all posts from 2021 and 2022 that were about CSK. Also, Jadeja deleted a tweet from his Twitter account earlier this week.

Fans of Mumbai Indians, led by Rohit Sharma, also flooded Twitter by asking for a trade move. Many believe that the seasoned player would be a good fit in the MI XI, and asked the franchise to trade Ishan Kishan for him.

"Even I want the same badly but I don't think it's possible as we have Sanjay, and Shokeen already and Jadeja will go for 10Cr+ which MI won't spend. Only possibility - MI trade Ishan for Jadeja," wrote a fan.

"Jadeja for Ishan isn’t a bad choice...mi can then play Brevis, Stubbs and Tim David without compromising on their bowling!" tweeted another user.