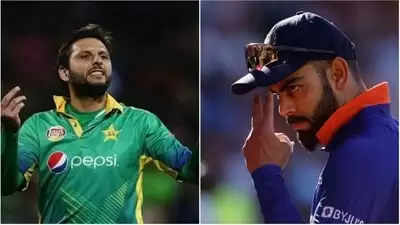 The last few months have been rough for Virat Kohli, who used to lead India. During the recently finished tour of England, the batter failed to reach 20 runs in two T20Is and the same number of ODIs. Also, he was given a break during the current tour of the West Indies, which consists of three ODIs and five T20 games. When he wasn't on the team, it made people worry even more about his form and what the team management had planned for Kohli.

“Why would he care about my advice? He has to perform because the expectations from him are so high from Virat. And for a very long time, there has been no performance from him according to the standards that he has set for himself,” Afridi said during an interaction with reporters in a video posted by Sports Paktv.

“As far as Pakistan team is concerned, it is a balanced side. I hope that not only in Asia Cup, but even in the World Cup, our performances will be good. I hope the players are fit, because I don't see much strength on the bench. But the 11-12 first-team players that we have, they are very strong and I hope they will bring in good results,” said the former captain.