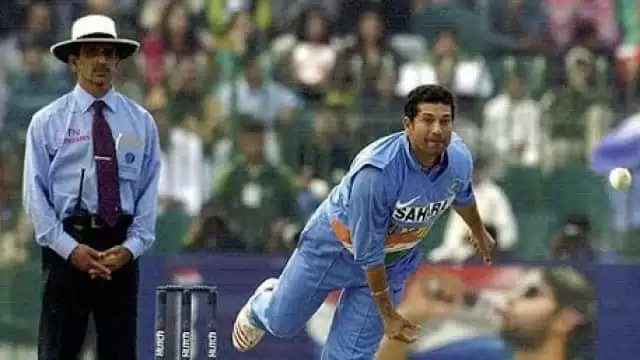 In 2007, the West Indies cricket team was on a tour of India and the first One Day International match there were a lot of runs in that match. At that time Rahul Dravid was the captain of Team India and Mahendra Singh Dhoni was a very young wicketkeeper the amazing work done by Sachin Tendulkar with ball after bat is still fresh in the minds of cricket fans.

India opted to bat first, India scored 338 for three in 50 overs. Sachin Tendulkar was run out on 98, Dhoni scored 62 not out off 42 balls and Dravid scored 54 not out off 35 balls. In response, the West Indies also thrashed the Indian bowlers.

For the first wicket, Chris Gayle and Shivnarine Chanderpaul added 80 runs. With early dismissals of Gayle and Runako Morton, Harbhajan Singh brought India back into the match. West Indies had lost three wickets for 175 runs, and Brian Lara was at the crease with Chanderpaul. Both were making quick runs. In 40.2 overs, West Indies scored 241 for three. Tendulkar was bowling when this ball was delivered.

Since the morning upload sparked a @sachin_rt bowling appreciation flood, here's him dismissing @BrianLara , not for the first time in ODIs. His 'Bola Tha Maine' to Dhoni tells that he anticipated Lara coming down the track. Also, link to the 1993 dismissal is in the reply pic.twitter.com/M5dKe0NQ84

Brian Lara came out of the crease on this Tendulkar delivery, and Dhoni showed him the way to the pavilion without losing the chance of stumping. Tendulkar's joy over this wicket can be seen in his celebration. Because Lara was looking in such a rhythm, he would have returned after winning the match if he had stayed. 'Bola tha na I,' Tendulkar told Dhoni after taking the wicket.