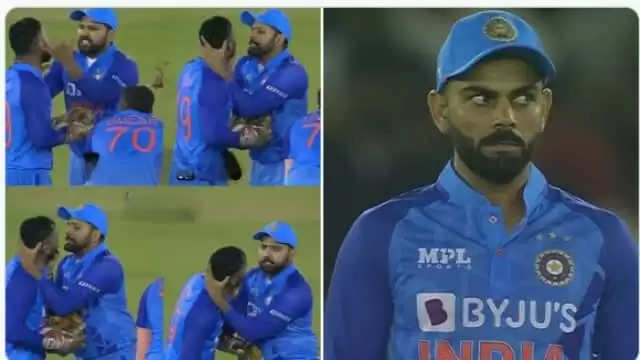 For the Indian cricket squad and supporters, the Mohali T20 match has been a nightmare. The batsmen set a reasonable goal, but the bowlers were poor throughout the match, and the Australian batsmen scored quickly and easily won the opening match. India has grabbed a 1-0 lead in the three-match T20I series with their victory. During the Australian innings, Umesh Yadav bowled the second over. His first over, however, proved expensive. Cameron Green hit four consecutive fours.

During this moment, when the Australian batsman smashed a four on the second delivery of the over, Virat Kohli's response was captured on video, and Kohli was seen to be in a lot of difficulty. Umesh Yadav's first over proved to be extremely costly. However, observing Virat Kohli's reaction in this over, West Indies veteran Ian Bishop couldn't help but tweet about Virat. "I have a feeling Virat Kohli's appearance is going to be a meme," he stated in his tweet.

Along with Team India's bowling, the fielding was also subpar. The fielders lost numerous catches while, on some occasions, the ball took the batsman's edge and neither the wicketkeeper nor the bowler heard or responded. When skipper Rohit Sharma found out about this, he was seen humorously gripping Dinesh Karthik's neck.

Simultaneously, Virat Kohli's meme about this is going popular. On this, a fan posted a photo of Kohli with Rohit and Dinesh Karthik with the caption, "When your father is thrashing you and me and my brothers." When you hear everyone is beating, get Kohli to bowl a couple of overs.