Chris Morris announces retirement from all forms of cricket 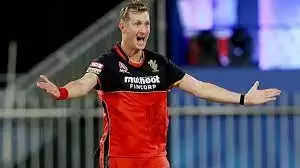 Indian Premier League's most expensive player Chris Morris announced his retirement from all forms of the game with immediate effect. The South African all-rounder took to social media to make announcement and also confirmed that he accepted a coaching position with the domestic side Titans.

"Today I announce my retirement from all forms of cricket! Thanks to all who have played a part in my journey whether it be big or small it's been a fun ride! Delighted to be taking up a coaching role at @titanscricket #lifebeginsnow," Morris wrote on his Instagram page.

Morris became the costliest player at the IPL auction after being bought at INR 16.25 crores by Rajasthan Royals in the IPL 2021 auction. The 34-year-old is an exceptional hitter of the ball down the order and a prolific wicket-taker. Despite of fitness issue, Morris was an all-rounder every team wanted to have on their side.

Morris made his First Class debut for North West at the age of 22 in 2009. By 2011/12, he managed to establish himself as their leading bowler. During that season, he was the highest wicket-taker in the domestic T20 competition with 21 wickets.