How He Pampers Cat at Practice Session in Mumbai; Heartwarming Pics go Viral!! 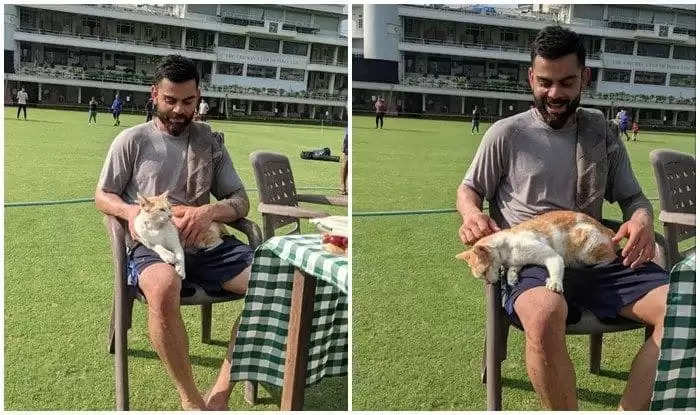 Virat Kohli is back after the T20 World Cup debacle, to lead the side in the final Test at Wankhede Stadium. On Tuesday, he gave fans a glimpse of the pet lover in him, shared a couple of images on his social media handles seen pampering a cat on his lap after practice at the Cricket Club of India (CCI). Kohli captioned the pictures as: “A quick hello from a cool cat at practice.”

A quick hello from a cool cat at practice 😺 pic.twitter.com/0qeW9biUqo

Once Kohli posted the pictures, fans started reacting. Here are some of the reactions:

adopt me im cuter than a cat


Recently, Kohli faced heavy criticism after India’s early exit from the T20 World Cup. Before the marquee tournament itself, Kohli had announced that he would no longer lead India in T20Is. Fans would be eager for Kohli’s comeback as he is a big star in India.

The first Test starts on Thursday and India would start favorites despite their loss against the same opposition in the World Test Championship final.