INDW vs AUSW: Shikha Pandey delivers 'Ball of the Century' 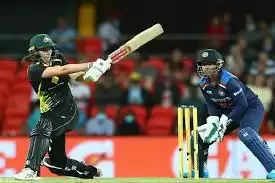 India right-arm pacer Shikha Pandey produced one of the greatest deliveries ever to be bowled in the second T20I against Australia at the Carrara Oval on Saturday, dismissing Alyssa Healy. Australia chasing a 120 target, Shikha opened the bowling for the Indian women's cricket team and dismissed opener Healy on the second ball of the innings leaving everybody including her teammates, TV commentators and fans stunned.

Shikha pitched the second delivery of the first over of Australia’s chase on the sixth stump and in the blink of an eye, it came in sharply to hit the top off the off stump dismissing Healy for 4.

The video of the delivery went viral on Twitter. Fans and experts from the cricket fraternity are lauding Shikha for the swing she was able to generate.

Although, India lost the game by 4 wickets with 5 balls remaining undelivered. Australia finished with 119/6 in 19.1 overs taking a 1-0 lead in the three-match T20 series. The first match of the series was abandoned midway due to rain.