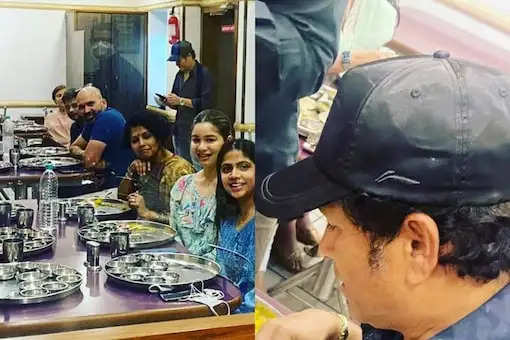 Batting legend Sachin Tendulkar, on Wednesday, celebrated his wife’s Anjali Tendulkar birthday with family at a Gujarati restaurant. The couple got married on May 24, 1995, is admired by many across the country. Anjali turned 54 on Wednesday as Sachin posted a couple of photos from the family outing where daughter Sara Tendulkar was also present. “Had a સરસ Gujarati thali at Shree Thaker Bhojnalay to celebrate Anjali’s birthday. Her Gujju genes are strong but our jeans’ buttons were weak after this meal! Also, was amazed to learn that this restaurant is running since 1945," Tendulkar wrote.

Master Blaster is back at home from the UAE after the conclusion of IPL where he was mentoring Mumbai Indians.

Recently, Tendulkar is placed at number 35 in the list of most influential people, according to annual research carried out by consumer intelligence company Brandwatch.

The research cited Tendulkar’s “appreciable real work for the less fortunate, lending his voice and presence for the right causes, his inspired fans following his work, and his partner brands’ relevant impactful campaigns” for his inclusion in the list.

The former India cricketer is associated with UNICEF for more than a decade now and was appointed the ambassador for South Asia in 2013.