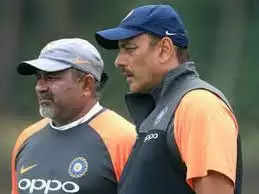 Ravi Shastri took over the responsibities of a head coach in 2017 and was reappointed in 2019. He has led Virat Kohli and team through many successful home and away series - in Australia, England at home and England away. However, it’s the teams' performance in the ICC events that has led to disappointment for BCCI. According to sources, Ravi Shastri is unwilling to renew his contract although enjoying a great rapport and support from skipper Virat Kohli.

It has been learnt that Ravi Shastri will be stepping down from the role of Team India head coach after T20 World Cup. While there has been no official communication from BCCI or Shastri himself. Although, BCCI chief Sourav Ganguly wanted to give him a month of extension for India’s Tour of South Africa in December but the coach has decided not to take the extension. However, it is still unclear whether Rahul Dravid, who is also out of contract for NCA chief’s, has been approached for a temporary role. Earlier, it was speculated that Rahul Dravid would be taking up the responsiblities of Team India coach, but later he confirmed that he was not interested in the role and reapplied for the NCA chief job.

BCCI is set to invite applications for Team India coaching job after the T20 World Cup. Furthermore, BCCI will not renew the contracts of assistant coaches despite their good performances. Bowling coach Bharat Arun, fielding coach R Sridhar and batting coach Vikram Rathour who has come under fire after poor performances from Virat Kohli, Ajinkya Rahane, and Cheteshwar Pujara will step down before the New Zealand series.