Dhoni-Like Finisher Came In Team India, Created A Big Ruckus With The Bat Against West Indies!! 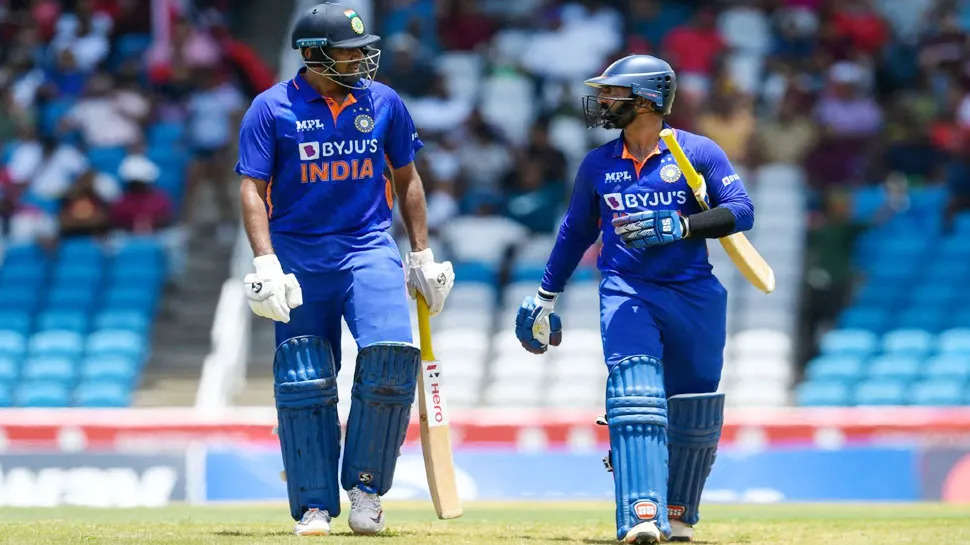 Rohit Sharma led Team India to register a spectacular victory by 68 runs in the first T20 match against West Indies. There was a player who won everyone’s heart with explosive batting. This player made the Indian team victorious on his own. This player bats just like Mahendra Singh Dhoni (MS Dhoni).

In the first T20 match against West Indies, Dinesh Karthik had a rough time. Karthik hit the ball from every side of the field. Team India was only 150 runs away from losing, but Dinesh Karthik played a big inning with his understanding. He was the player who helped Team India win the most games. In the first T20 match against West Indies, Karthik got 41 runs in 19 balls. He hit four fours and two long sixes. Team India won because of how well he played.

In IPL 2022, Dinesh Karthik was the finisher for the RCB team. Karthik had an impressive strike rate of 183.33 and scored 330 runs. He had the best strike rate of any batsman who scored more than 300 runs. In the league stages of the IPL, Karthik was not out in seven of RCB's wins.
In 2004, Dinesh Karthik played his first game for Team India. Karthik has played all three types of cricket for the Indian team. Karthik has scored 1025 runs for the Indian team in 26 Tests, 1752 runs in 94 ODIs, and 525 runs in 42 T20s. He won many games on his own for Team India.

Dinesh Karthik has become Team India's best runner in the IPL 2022 and South Africa series. Karthik is a star batsman who also keeps wickets. He doesn't feel pressured when he's trying to get runs, and he's also good at keeping wickets. Karthik has lived up to his name as a finisher by wearing the blue jersey. In this case, the T20 World Cup choosers could give Dinesh Karthik a chance.