Watch an episode of sweet revenge against Kyle Mayers!! 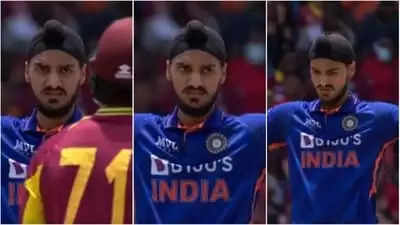 Team India registered a comprehensive 68-run victory over West Indies in the first T20I of the five-match series on Fridayposting a strong score of 190/6 in 20 over.

The Indian bowler had his arms wide open after he picked the wicket. Watch the dismissal, and the celebration that followed:

Twitter also lauded Arshdeep for showing his aggression after the wicket. Mayers had slammed the bowler for a six on the first ball, and a four on the second delivery before being dismissed on the next.

In his debut against England during the T20I series against England, and had registered impressive figures of 2/18 in 3.3 overs. He remained economical in the West Indies T20I as well, conceding 24 for two wickets in his four-over quota.

The Indian bowler got his first international call-up last month for the five-match Twenty20 International (T20I) series against South Africa. This came after he played well in the 2022 Indian Premier League.

Earlier, the Indian team's bowling was strong across the board. Ravichandran Ashwin (22/22), Ravi Bishnoi (2/26), Bhuvneshwar Kumar, and Ravindra Jadeja each took one wicket.

On August 1, the second and third Twenty20 Internationals of the series will be played in Basetterre, St. Kitts. After that, both teams will go to Lauderhill for the rest of the series.