CSK vs MI: Dhoni loses cool after a confusion with Bravo over a catch

Chennai Super Kings registered a 20-run win over Mumbai Indians in the opening match of IPL 2021 phase 2. Despite, the thrilling performances from both the teams, it was far from a smooth ride for Dhoni led CSK. Dhoni who is often called 'Mr. Cool' as he is rarely seen losing his temper on the field and it remained that way even when CSK were reduced to 24/4. 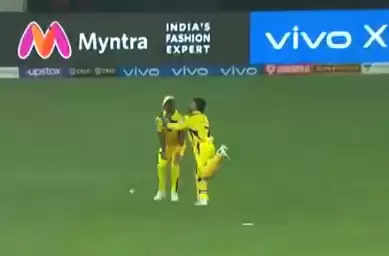 On Sunday, spectators got to see what is rarely seen on the field. Dhoni lost his cool after a confusion over a catch that he and Dwayne Bravo missed. The incident took place in the 18th over, when Rohit Sharma led Mumbai Indians needed 42 to win off 15 balls, the odds were still heavily stacked in CSK's favour. Saurabh Tiwary who was the last recognised batsman for MI tried to scoop Deepak Chahar but the ball popped up after a thick leading edge. Bravo was at short fine leg but Dhoni with his gloves on wanted to go for it himself. He ran towards it, as did Bravo and a confusion between the two led to a drop catch. Dhoni was clearly not impressed and mouthed a few words at Bravo while the latter too didn't seem to happy with the lost catch.

The brief moment of anger ended with CSK winning the match by 20 runs. After the match, Dhoni was seen leaving the ground with his hands around Bravo's shoulders. As for Bravo, the all-rounder had a big contribution to CSK's win after his brilliant 23 off 8 balls, a score that comprised of three sixes and picking up 3/25.