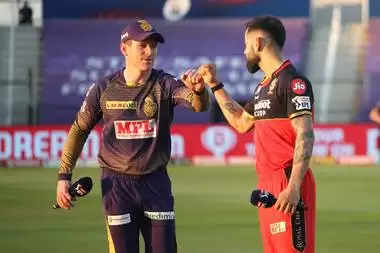 Virat Kohli led Royal Challengers Bangalore lost the chance of winning their first ever IPL title after suffering a 4-wicket defeat to Kolkata Knight Riders in the Eliminator in Sharjah on Monday. The chase of 139 runs went till the final over where KKR needed 7 runs to win. Shakib Al Hasan hit a timely boundary on the first ball of the final over to take his team in Qualifier 2.

It was a match that could have gone either way. RCB witnessed failure on the batting front with Virat Kohli being the highest scorer for the side with 39, followed by Devdutt Padikkal with 21 runs. Srikar Bharat failed to repeat his previous performances and fell prey to Sunil Narine's ball with 5.

Meanwhile, Kolkata maintained consistancy on the score board despite no batsman crossing a 30 figure. Sunil Narine was the highlight of the day with his brilliant performance - 4/21 (4) & 26 (15). Narine was named the 'Player of the Match'.