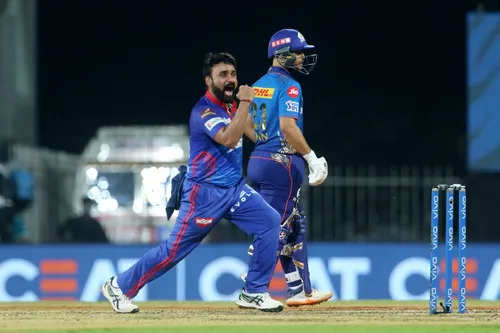 Delhi Capitals continues with the winning spree after a 4-wicket win over Mumbai Indians in Sharjah on Saturday. This is DC's second win over the defending champions after beating them by six wickets in Match 13 in the first phase of IPL 2021.

Mumbai was put to bat after Rishabh Pant won the toss for Delhi. Rohit Sharma led MI managed a 129 total at the loss of 8 wickets. Evidently, things are not going in the positive direction for the five-time IPL champions. In last five matches Mumbai has managed to win just one. A team who once ruled the charts has now settled for sixth place in the points table with only 10 points from 5 wins out of 12 matches played.

With Chennai Super Kings and Delhi Capitals already in the playoffs, Mumbai's chances of making it to the next phase seem bleak.

“I felt really amazing to bat through and take my team till the end. It was a low scoring game so I decided to stay till the end even though I was shifted lower down the order. I backed myself and backed my instincts," said Shreyas after the match.

Shreya was the highest scorer for Delhi with 33 runs off 33 ball while Rishabh Pant was second highest with 26 runs.

Despite a slow start to the chase, DC's middle held the game together and reached the target in their 19th over.