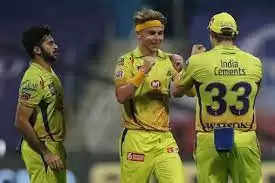 Chennai Super Kings have signed Barbadian seamer Dominic Drakes as a replacement for the injured England all-rounder Sam Curran for the remainder of the VIVO Indian Premier League (IPL) 2021.  Sam Curran was ruled out with lower-back injury.

Drakes who was already in the IPL bubble, having been picked up by the Mumbai Indians as a net bowler. Drakes is an uncapped West Indian all-rounder who has featured in one First-Class, 25 List A and 19 T20 matches so far.

As per the rules, a franchise can seek a replacement before their last game and Chennai sign off the league stage with a game against Punjab Kings on Thursday (October 7) afternoon at Dubai International Stadium.