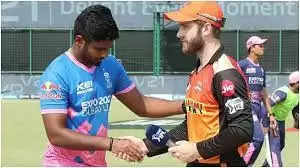 A long wait finally meets its end! After back-to-back lost matches Sunrisers Hyderabad breaks the jinx with a 7-wicket win over Rajasthan Royals in Dubai on Monday.

The fifties from Kane Williamson (51*) and Jason Roy (60) guided Sunrisers to a convincing 7-wicket win against Rajasthan in 40th match of the Indian Premier League (IPL) 2021. With Royals' opting to bat first, the side cropped up a 164-run total at the loss of 5 wickets. Despite Sanju Samson's 82 off 57 balls, RR lost the match after failing to withstand SRH's bowling attack.

In the chase to a 165-run target, SRH openers, Wriddhiman Saha and Jason Roy added 57 runs for the first wicket and later the middle order cameo helped Hyderabad to keep the momentum on their side. Jason Roy remained the top scorer for side, followed by skipper Kane Williamson who remained unbeaten for the day.

Jason Roy was named the "player of the Match' for his brilliant innings.

Here's how the Points Table looks after Match 40 of the #VIVOIPL 👇 #SRHvRR pic.twitter.com/JaqR6yFSaZ

Despite of today's win, Sunrisers Hyderabad remain in the eighth spot with 4 points from two won matches out of ten played. Rajasthan Royals is in the sixth place with 8 points from four wins out of ten games.