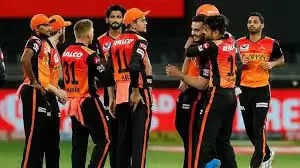 On Wednesday, Sunrisers Hyderabad defeated Royal Challengers Bangalore in their second last match of the league in Abu Dhabi. A brilliant match with SRH batting first and placing a target for 142 for the Virat Kohli led RCB.

Jason Roy opened for Hyderabad on a high note with 44 off 38 balls, Skipper Kane Williamson followed the league while adding 31 to the tally and becoming the second highest scorer for the side. With a 141 total, Sunriser lost seven wicket along the way.

Bangalore got off to a slow start with Virat Kohli's early dismissal. However, Devdutt Padikkal took charge of the situation with 41 runs followed by Glenn Maxwell, who contributed 40 to the tally. However, RCB's batting order failed to withstand SRH's bowling attack and piled up at 137/6.

A flurry of emotions in both the camps as @SunRisers clinch a thriller against #RCB.