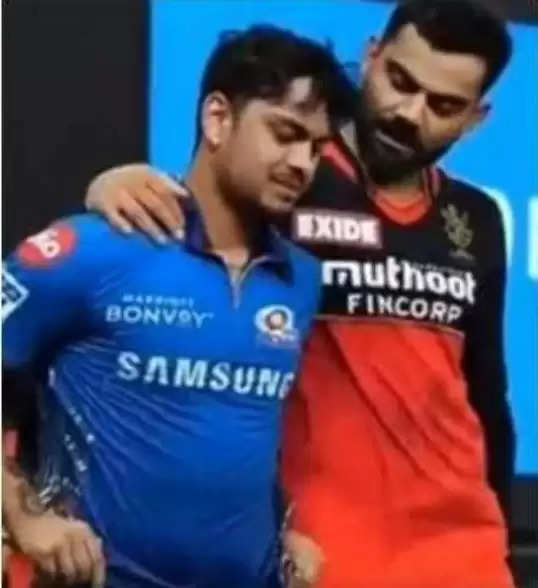 On Sunday, Royal Challengers Bangalore thrashed Mumbai Indians by 54 runs in Dubai. RCB's bowling unit dismantled MI's batting order with Rohit Sharma being the highest scorer for Mumbai with 43 runs followed by Quinton de Kock who scored 23 runs. However, the remaining batters failed to perform with no other reaching a two digit figure.

Team India's talented player Ishan Kishan, who has earned many praises with his performances for the Indian squad failed to shine this IPL season. Ishan's current season IPL campaign has been a complete contrast to his previous season's form. The former U-19 captain has struggled with the bat in current edition of IPL. He has managed to score only 107 runs in eight outings at an average of 13.37.

Kishan who scored just nine runs against RCB before Yuzvendra Chahal dismissed him as the defending champions stumbled to a 54-run defeat. After Kishan's dismal performance, Kohli was seen consoling the youngster and giving a pep talk on the ground.

Audio of what Virat Kohli said to Ishan Kishan on his bad phase. #IPL pic.twitter.com/FhHZ842S19

Kishan seemed devastated with his unimpressive form and especially with the T20 World Cup less than a month away, his current form is a matter of concern for the Indian team.